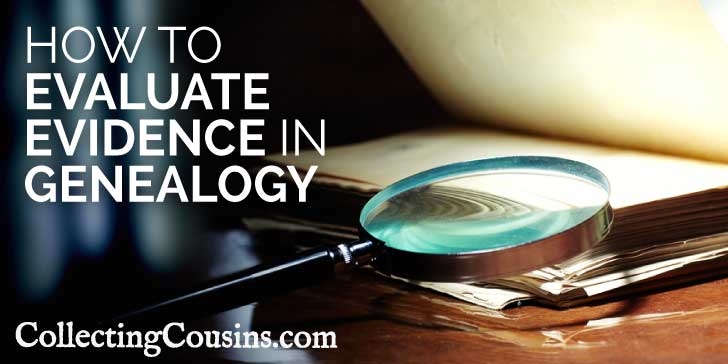 As you get into more complex identity problems and work with less standard sources, better evidence analysis will improve the quality of your research and increase the likelihood of solid conclusions about your ancestors' lives. This overview will give you a good starting point and is written with the beginner in mind; for a more in-depth discussion of evidence analysis and genealogical standards, I recommend The BCG Genealogical Standards Manual published by the Board for Certification of Genealogists.

There are three items that must be evaluated in order to determine the reliability of any evidence:

Sources and information can be evaluated independently, but evaluating evidence in genealogy cannot be completed without the question we are trying to answer. 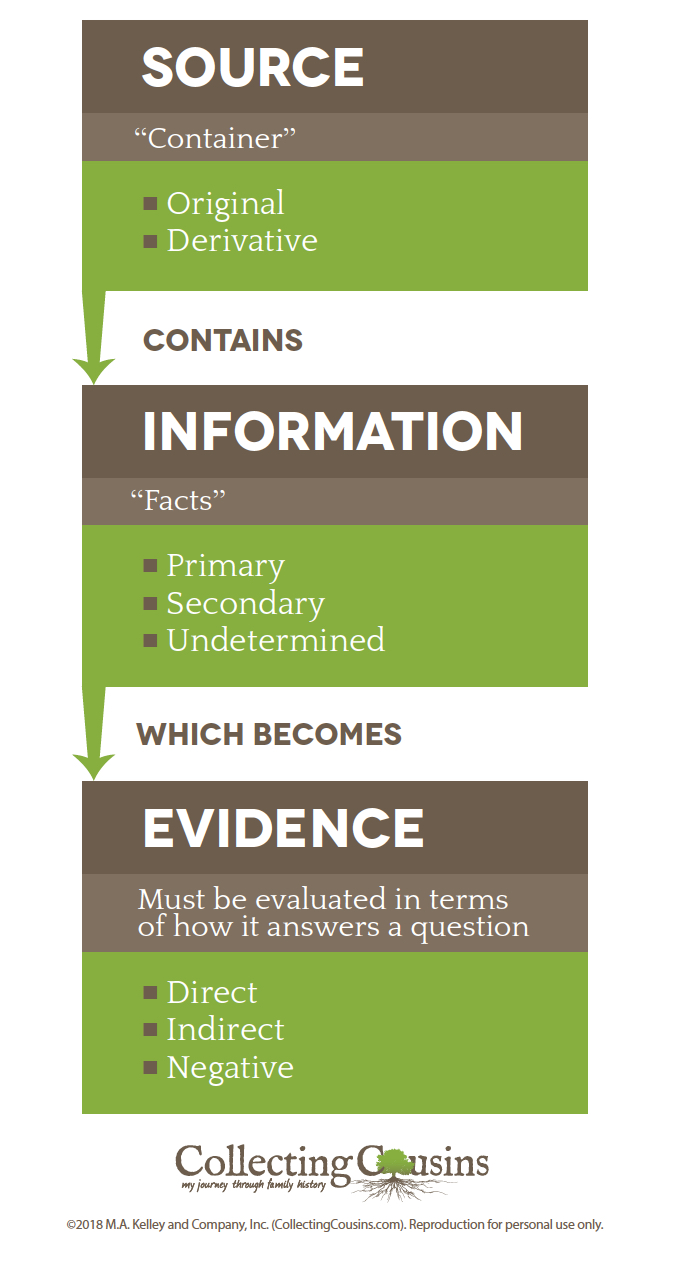 According to the National Institute for Genealogical Studies, we should think of a source as a container for information. Genealogical information can be found in "containers" such as books, censuses, vital records, family histories, interviews, letters, and more. These "containers" are sources, and they can be classified as original or derivative:

Understanding the difference between these source classifications helps the genealogist to evaluate the reliability of the information found in the source.

Once you have evaluated the source (or "container"), the information inside is evaluated. Individual pieces of information are often called "facts" but they may not actually be factual. Evaluating each piece of information is a crucial step in determining its reliability. Information can be primary, secondary, or undetermined.

Each source can have multiple pieces of information, and each piece may have a different information classification.

A new researcher might assume that because a source is an official document such as a death certificate, it is a "reliable source" for all of the information it contains. [inlinetweet prefix="" tweeter="" suffix=""]All information in a source can never be grouped together and classified as a whole--it must be individually evaluated.[/inlinetweet]

This chart gives an overview of information commonly found on a census and how it would be classified if we know that the head of household was the informant:

You might find it odd that a person's answers about their own birthplace is considered secondary, but that information is only what they have been told. We cannot confirm with firsthand knowledge where or when we are born because we have no memory of it. On the other hand, as parents we can confirm when and where our children were born, making it primary information.

[inlinetweet prefix="" tweeter="" suffix="#genealogy"]Information only becomes evidence when we are trying to answer a question with it.[/inlinetweet] By itself, it is only information. Evidence is classified as direct, indirect, or negative.

The common thread of each classification for evidence is that it must relate to a question. Without a question, evidence cannot be evaluated.

Example. Using a census as an example again, let's suppose that we are researching John Martin and want to know when his wife Mary died. To keep the example simple, let's assume that we already know that John and Mary got married in 1855 and John had no other marriages before or after his marriage to Mary.

In 1860, a census lists John and Mary Martin in the same household. This is direct evidence that Mary is still alive when the census was enumerated.

In 1870, the census lists John alone in the household. Mary's absence in the household is negative evidence for her death--we would expect to find her there and her absence infers that she could be deceased.  We cannot conclude that she is deceased, however. In the absence of corroborating evidence we have to consider that she may have left her husband, or that she was living elsewhere caring for a parent, or any other number of possible circumstances.

An 1880 census listing John alone in the household and states that he was widowed is indirect evidence of Mary's death sometime prior to the official census date. It is only when combined with the information that John did not have any other marriages that we can determine that he is Mary's widower and not a widower from a subsequent marriage.

Putting It All Together

In genealogical research, we have to combine all three elements of evidence analysis to get a full picture of the reliability of the evidence. The quality of the source, the quality of the information, and what kind of evidence the information provides all contribute to making a solid conclusion. It is not uncommon to find five or six sources with differing information about a particular event, so being able to analyze each in accordance with the genealogical standards will allow you to accurately determine which is the most reliable.

Need help remembering the options for sources, information, and evidence? Download the cheat sheet below and keep it handy while you are working.

Choose an ancestor for which you have multiple birth dates asserted. Evaluate the source for each, determine whether each assertion is primary or secondary, and evaluate how the evidence relates to the question of when your ancestor was born. I'd love to hear what you discovered and if your analysis helped you to come to any conclusions!

The BCG Genealogical Standards Manual - The Board for Certification of Genealogists is the authority on genealogical standards. This manual is a helpful reference for evidence analysis as well as the genealogical proof standard (GPS).

Evidence Explained (affiliate link) - The first chapter of Elizabeth Shown Mills' handbook for citations discusses evidence analysis at length. I have both the hardback and the Kindle version, and I much prefer the Kindle version to the physical book because I can have it open as a reference on my MacBook while I am working.

Evidentia Software - Evidentia walks you through the process of evaluating each assertion found in a source as well as creating citations. If you are overwhelmed by the evidence evaluation process, using Evidentia is a painless way to start.